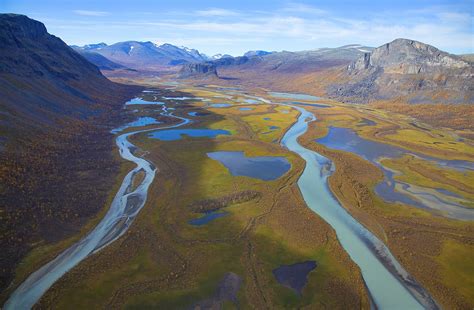 Unesco has published an letter to the Swedish authorities regarding the

The technical report published by Unesco assesses the impact of the proposed mining project to be ”at a minumum moderate adverse and hence the potential significance of effect or overall impact could be considered to be Large/very Large”. Yet the open letter remains reluctant to make any clear statements as to the project being inherently incompatible with the future existence of the World Heritage Site in its current supposedly protected state.

The choice of words – the World Heritage ’property’ – obviously mirrors the ideological bias of the publishing institution that conceives of the world as a collection of pieces of property. Their concern is to maintain the designated area as a piece of property that continues to display traits of cultural ”authenticity” and ”outstanding universal value”. As we know, this value can always be trumped by financial value when political authorities so decide. Until recently, the bourgeois notion of property was alien to Sápmi – they saw themselves as belonging to the land rather than the land belonging to a person let alone a company – and the land use was defined by usufruct (not ownership, but use) rather than the profit-making logic that is now step by step making their way of life impossible as forestry, mining, damming and other industrial-infrastructural projects aimed at extracting profit for foreign investors engulf ever further on the once plentiful land that supported their economy.

In the letter Unesco expresses its wish that all relevant documentation from the Sami Parliament (Sametinget) be submitted to their World Heritage Center. However, it fails to mention the quintessential documentation from the Sami Parliament that pretty much sums up the central issue at stake here. Already in 2013, when the first round of test drilling was done at Gállok, the Sametinget announced that they opposed all further exploitation of Sápmi as long as the Swedish state refused to recognize and ratify the principle of ”Free prior and informed consent” (https://www.sametinget.se/61174), as mentioned in the United Nations’ own tenth Article of their Declaration on the Rights of Indigenous Peoples. The Swedish state’s refusal to ratify even this basic UN declaration is a testament to its shameless neocolonial intent with the region of Sápmi and its Sámi population. It will continue to try to instrumentalize the Sametinget as a democratic veil covering the past and present colonial legacy; it will continue to usurp souvereignty over matters of political-economic importance.

The vague and indecisive formulations of Unesco’s letter basically amount to a recommendation for further impact assesments:

”IUCN and ICOMOS conclude that it appears necessary and appropriate for the State Party to consider seeking a revised and extended In-Depth Impact Assessment which provides a more secure basis for assessing the impact of the proposed development on the World Heritage property and which is also carried out in line with the principles of the IUCN World Heritage Advice Note on Environmental Assessment and based on updated information, prior to any decision being taken to approve mining exploitation.”

In response to the Unesco publication, which is likely to at least temporarily impose further bureaucratic obstacles onto Beowulf’s progress in Gállok, shares have been dropping by 16% in just a few days. Increased pressure can help to bring them further down, expose the Swedish state’s colonial policy and assist Sámi people in their opposition to neocolonial and neoliberal land grabbing and ecological destruction.

It’s soon spring and we are waiting for the company to announce their next move. But we are not idle. Together with friends and comrades we conspire and make plans for the coming day x. Keep your ears to the ground and your nose towards the wind to make sure the whispers in the dark reach you. Together we will turn their coming order into a frenzy of chaos.